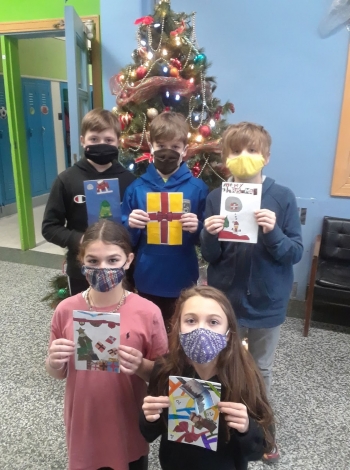 ​​​​Students at Ste-Foy Elementary School are bursting with Christmas cheer. The Cycle 3 students are once again creating greeting cards to add to the boxes of groceries put together by the Community Christmas Hamper Campaign, which will be distributed to families in the Quebec City area on Dec.19.

​​​​​Reid Duns, a teacher at Ste-Foy Elementary School, is training hard for his 7,500-km cross-Canada bike ride to raise $75,000 for the Alzheimer Society. His departure isn’t until May 2, 2020, but you can help him reach his goal by donating or "buying" a kilometre or more for $10 per kilometre.

Ste. Foy Elementary School students Freya Turner-Dufour and Anya Hadiwijaya helped prepare handmade greeting cards to be included with each of the boxes of groceries delivered by the Community Christmas Hamper Campaign, and they wrote this article!

Race for a defibrillator at Ste-Foy Elementary School